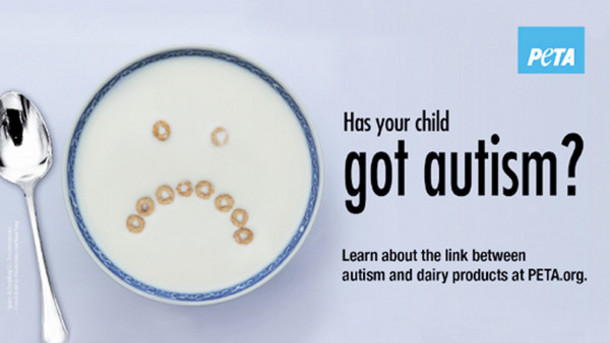 The Peta Autism Billboard & why I’ve got beef with it

US Peta Autism Billboard: An open letter to Peta UK

It is with great consternation that I discovered the US Peta autism billboard advertisement linking Autism with milk. As far as I can tell, from Sense About Science’s blog about this, it’s not something that Peta UK currently have a standpoint on, beyond using testimonials.

The trouble with testimonials is that they are very convincing but not trustworthy – people’s memories aren’t great and they attribute improvements to all kinds of things that might not be correct.

I used to work with children on the Autism spectrum and their parents are often extremely tired – they get little support in the UK (I can’t speak for the US) and they are subject to all kinds of stigma. I know, from my research in this area (and from my 2012 survey with 701 respondents) that many people believe that Autism is the result of ‘bad parenting’ or ‘refrigerator mothers’. Many falsely believe that vaccines cause Autism. Others believe it is the will of god that some children have Autism. Some think that casein, gluten, mercury and leaky gut syndrome causes or worsens it. These are all proven to be incorrect – not just ‘we’re not sure’ – studies show that this is not the case.

It’s difficult to disprove the will of God – once we have evidence that he exists we’ll come back to his supposed powers.

The truth of it is: we don’t really know what causes Autism yet. It’s complex and it’s bewildering. New research is being conducted every day and it’s looking to be something that starts or has its roots in factors that affect us before we are born.

Parents don’t always immediately care about the science though (which seems abstract and high-level and at times, complex, contradictory and elitist). They want to hear what worked for other parents – quick stuff that they can effect easily with limited resources. They don’t have time to do all the research. They’re too busy parenting and trying to live their lives.

In 2012, the National Autistic Society published research stating the following:

So you can forgive parents for not having the time to do the research and, instead trusting what societies and agencies and charities say.

The Peta Autism Billboard suggesting that removing milk from your child’s diet (to help with symptoms of Autism) might not seem harmful to the People for the Ethical Treatment of Animals. On the face of it, it’s not. Humans can live without milk and there are plenty of other milk-like substances that work in milk’s place. I can’t speak to their nutritional benefit and I would agree that breast milk is preferable to cow’s milk, where it can be fed.

However, the problem I see is this: falsely using Autism as a hook to get people off dairy products is wrong. Ethically wrong. If you want to get people to stop consuming it then there are other, better, more convincing ways to do so. Telling people a falsehood to benefit what seems a positive end is more problematic than it might first seem. It ties in with all the other falsehoods, lies and myths that parents of children on the spectrum are bombarded with.

They’re told not to vaccinate their children. They’re fasely told to use chelation to remove mercury (that isn’t there in the first place). The chelation removes necessary vitamins and minerals that they need to grow. Including calcium. Sometimes, chelation can be lethal.

They’re told to use Hyberbaric Oxygen Chambers which can cause terrible nausea, vomiting, convulsions, inflammation & fluid accumulation in the lungs. And has no real benefit to their child’s symptoms.

The more that is thrown at these parents, who are, after all, trying to do the best for their children like all good parents are; the more they are confused and bewildered and looking for someone or something to blame.

And now it’s dairy. Dairy products are the evil accelerator of Autistic symptoms. Except they aren’t. Autism, being a spectrum disorder, has ups and downs and ins and outs and no two children on the spectrum have the exact same difficulties. That’s what makes it complex. Children grow up: neurotypical children regress and then grow up again. This is normal for all children and it’s usually impossible to attribute to just one thing.

With treatments given (or foods removed) over weeks and weeks, parents report that their children experience small gains. But then they would – they are growing and their brains are changing. We’d naturally expect any child to change and their skills to improve. We can’t predict the exact course of a neurotypical child’s development (just compare to others) – so how can we expect to know what a child with potentially limited communication skills (in some cases) is experiencing; feeling, knowing? How do we know whether it’s the removal of dairy alone that is causing this?

From the Peta US site:

“There was nothing to lose, so I decided to eliminate all the dairy products from his diet. What happened next was nothing short of miraculous. Miles stopped screaming, he didn’t spend as much time repeating actions, and by the end of the first week, he pulled on my hand when he wanted to go downstairs. For the first time in months*, he let his sister hold his hands to sing “Ring Around a Rosy.”

One child’s story of removing milk from his diet doesn’t address all the other factors that science would attempt to take out of the equation (known as confounding variables). What else is happening in his life? Has he moved school? Is he receiving behavioural treatment? Is he maturing; learning better social skills? What other factors might influence the measurement of what effect the removal of dairy has had? What other things has this parent tried which might be working alongside removing dairy? Have other treatments started or stopped at the same time? Have his parents also moved the a noise source to another room which means he’s getting better sleep? What made him stop letting his sister hold his hands in the first place, if he was eating dairy products before? We can’t know, from the above testimonial, exactly what else has happened to this child.

Maybe it’s simply that his mother felt sure an improvement would be made by removing dairy and so felt less stressed. Her behaviour could then impact on his and his sister’s. We simply can’t know.

What we can do is do studies on whatever theory we have – whether it’s dairy and its implications with Autism or single/no vaccinations and rates of Autism. Randomised, controlled, double-blind trials. That’s the best way we know how at the moment since we can’t look inside brains and determine attitudes, thoughts and feelings. We can just observe behaviour and take conclusions from that in many cases.

If only it were as simple as removing dairy products from the diet. But it isn’t. And I think it is cruel and dangerous to suggest anything to parents that isn’t backed up by science.

That’s why I urge you to make a statement on this and come out in favour of science. Not drinking milk can be an ethical stance. It doesn’t have to come with a litany of falsehoods, myths and scare-mongering coupled with a demonisation of children with autism.

Why cheapen your message with all that?

« What happens if we do pre-natal tests for Autism? Neurodiversity, autistic culture, advocacy and the spectrum.
Kent County Council slashes support for breastfeeding mothers »