America: resuscitating the English language since 1620

Lynne Murphy, Senior Lecturer in Linguistics and English Language at the University of Sussex

“An American teaching English?” she cried. “Surely that’s evidence of a brain drain?” And we were off, with Lynne Murphy’s gentle, self-deprecating humor informing her talk on  ‘How America saved the English language’.

Talking to a packed out room (I think the biggest I’ve ever seen at Horsham), she had a tough crowd of English skeptics (with the odd expat here and there) to convince. As a grammar nerd, former EFL teacher and all round languages fan, this was my kind of talk. There have been several articles over the years about the decline of language and I’d never seen linguistics or grammar approached skeptically before, so I was looking forward to it. But I was skeptical. Obviously. I’m a proofreader and editor and I find ‘Americanisms’ irritating as they creep and seep into the conscious of students sending essays my way. So would Lynne change my mind? I hoped so.

In honor of Lynne’s argument, I have resolved to use American spelling where I can. For the sake of brevity, I’m taking more tips from Lynne and using cutely BrE to signify http://vantagehsi.com/tag/home-health-care/home-health-care-set-an-appointment/ British English and transgressively AmE for American English.

Re DotD, ‘skeptic’ and ‘sceptic’ sound the same. The BrE spelling comes frm French, bt the pronunciation is truer to the word’s Greek roots

Lynne had come to Horsham Skeptics in the Pub, (noting the ‘K’), to talk to us about the degradation of the English language and whose fault it is. Only she wasn’t arguing that our language was being degraded at all. And even if it were*, it certainly wasn’t Americans who were sullying the Queen’s English. Knowing we were of a skeptical ilk, Lynne made sure she noted this was no straw man argument, quoting English actresses like Penelope Keith and Emma Thompson who used language of the highest emotional, violent and disease-ridden connotations, talking of “SMS vandals” and stating that American English is “savaging and raping” and has “permeated, pervaded and polluted” British English.

Skepticism’s bête noire, Prince Charles, (who is, of course, the Prince of Wales) also got a mention as he has said that only English English is English and lamented “they make words that shouldn’t be”. Anu Garg, an Indian-American author and speaker, bemoaned that the changing English language was “a kind of barbarism”, an idea that many English people may well agree with, despite the hyperbolic association with destruction and violence or primitive and savage behaviours that word conjures.

Other bug bears noted were ‘fess up instead of confess, ‘face up to’ instead of confront and ‘it’s a big ask’, one that caused me some trouble only recently, on Twitter of all places. Of course Twitter is often blamed for the rise in tlkng lke dis in order to save on characters, yet I would have thought that the days of telegraphs, where you had to pay for each word, would have been a prime time to rstrct ur wrd lngth.

So it was, on May 15 (or the 15th of May) that I was convinced that America saved the English language. ‘Face up’ was found from as far back as 1720, where the OED cites Daniel Defoe, the English writer responsible for Robinson Crusoe.

‘It’s a big ask’ is Australian, not American.

‘Might of’ (might have)  is simply the artefact of an over-reliance on pronunciation to aid spelling – it’s illiteracy, not an Americanism.

It’s not just the average British citizen who finds ‘Americanisms’ galling (frequently not Americanisms, but the work of language preservationists, as you’ll see), but Cambridge-educated writers and actors like David Mitchell too, who, it seems, was loath to consult the Oxford English Dictionary when he labored under the misapprehension that tidbit was a censorious reaction to Americans’ bashful feelings for the word ‘tit’. Tidbit is actually the original English. See Lynne’s discussion here for more.

Moving on, we come to maths vs math – the one that still grates on me even though I’ve accepted Lynne’s stance on this.

Maths is not plural, (one mathematics, two mathematics) so why do we put the ‘s’ at the end? We don’t say “maths are hard”. After Dan tweeted the above, I asked him about it and he concluded:

@Tannice_ It should really be “math’s” with the apostrophe hiding the “ematic” part of the shortened word, but obviously that’s sillier?

Which of course brings all kinds of problem with what looks like a possessive apostrophe rather than one signifying a contracted form of a word.

How about ‘gotten’, then? That’s one most of us find difficult to swallow? Gotten is actually the older past participle and if we reject ‘gotten’ then we must also forsake ‘forgotten’, ‘ill-begotten’ and ‘misbegotten’.

So we go on to pronunciation…. ‘erbs.

Herb vs ‘erb is one that’s arguably the most commented on and noticeable, yet we’re more than happy not to pronounce the ‘h’ of hour or honest. The reason for the ‘h’ of herb being so obvious now in BrE is because of class pressures. ‘Lower class’ people typically dropped the ‘h’, meaning the ‘upper class’ emphasised it so as to assert their superiority. Much as they do now on the difference between ‘aitch’ and ‘haitch’.

Eggplant is another word that AmE preserves, preferring it to the French, Aubergine. In fact, Lynne argues, the British are not, as you might think, Gallophobic at all. We love French and have taken its language and made it our own. We say shedule for schedule (not skedule like in AmE. The original pronunciation in the 18th C was ‘sedule’). We also take ‘ise’ instead of ‘ize’, for words like humanize and standardize.

Another interesting nugget (there were several) from Lynne’s talk was the word ‘transportation’. BrE speakers often complain that Americans overemphasize  words by lengthening them, yet transportation was the original word. As it became tainted by its connotations with penal transportation, we switched to ‘transport’ to mean general conveyance of people, animals and goods. 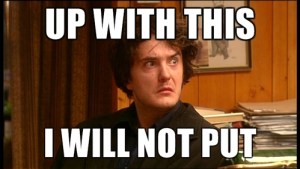 Fowler's Modern Language has a lot to answer for

So, does English need saving? Lynne says no: there’s little to no unidirectional evidence that AmE or BrE are invading our respective shores and taking over. But language is living and Lynne puts herself safely in the middle of the prescriptivist vs descriptivist language debate, something that, as an editor  but also a writer, I’m firmly on the fence about myself. As a gatekeeper (whether that’s as an editor or a teacher of English) you must teach the rules and standards of grammar and style, but you must also teach people when style impacts on substance enough that those rules can be bent and even twisted for poetic license.

English has a lot of weird, Kafkaesque rules, many of which are archaic and simply Latin grammar rules  imposed when we standardized.

But would English be where it is today, post-war, where over a billion people speak at least basic English, were it not for America? This is certainly arguable and came up in discussion, but I’m willing to bet people wouldn’t still be learning English centuries after Britain started to resent its arrogant (and now inappropriate) ‘Great’ moniker** and lost power over the colonies if it weren’t for America’s (relatively) new status as a superpower.

There were many things to be skeptical about last night, like natural tribal reactions to language differences, but whether Lynne was right on AmE championing ‘proper English’? I’m sold.

**yes, I know. That’s not the derivation of Great Britain. I was making a point about how we’re not as massive or awesome as we used to be, in terms of power over other countries.